1. Why build remotely?
2. How to start a remote company
Building Remotely
LibraryBlogPodcastEventsSubscribeAbout
Get future interviews, tools, and resources delivered straight to your inbox
Made with ❤ by

How Are cities incentivising remote workers to move?

It’s no secret that the post-pandemic world will be a very different place, especially when it comes to remote work opportunities. Before the pandemic, remote work was one of the fastest-growing employment sectors in the USA. The future of remote employment is no longer a hypothetical situation, but a reality. Cities worldwide are taking note and have begun launching incentive schemes to entice this new workforce to settle down within their borders.

"Instead of trying to lure whole companies with economic development incentives, more cities are beginning to target individuals who suddenly have the agency to pick a city on its merits, not its employers.” - Bloomberg CityLab

The increased freedom of remote work will allow people who have been strangled by high living costs to spread their wings to new locations of their choosing, based on a variety of factors that don’t just revolve around their respective companies’ location. This isn’t just speculation, there is a very real exodus happening within our cities lately.

"We're seeing the biggest transfer of labour since the industrial revolution, and quite possibly in the history of mankind, where pre-COVID we had about 5.5% of the US workforce working remotely. And right now we're floating at about 45%.” - Liam Martin, CEO of Running Remote, "Managing crisis as a remote company"

Nearly a quarter of the workforce could work remotely three to five days a week as effectively as if they were working from an office. This kind of shift could have a dramatic effect on urban economies, transportation sectors and consumer spending. As companies like Twitter, Spotify, Coinbase and Hubspot keep adopting remote first and hybrid models of remote work in 2021, many will follow suit. As optional remote working becomes the norm companies offer to their teams, we'll see an increase in location independence and the freedom to choose where you are based.
While the persistent global vaccination efforts promise a possible return to a pre-pandemic lifestyle sometime in the near future, we'll be dealing with an important question: to what extent will remote work persist? 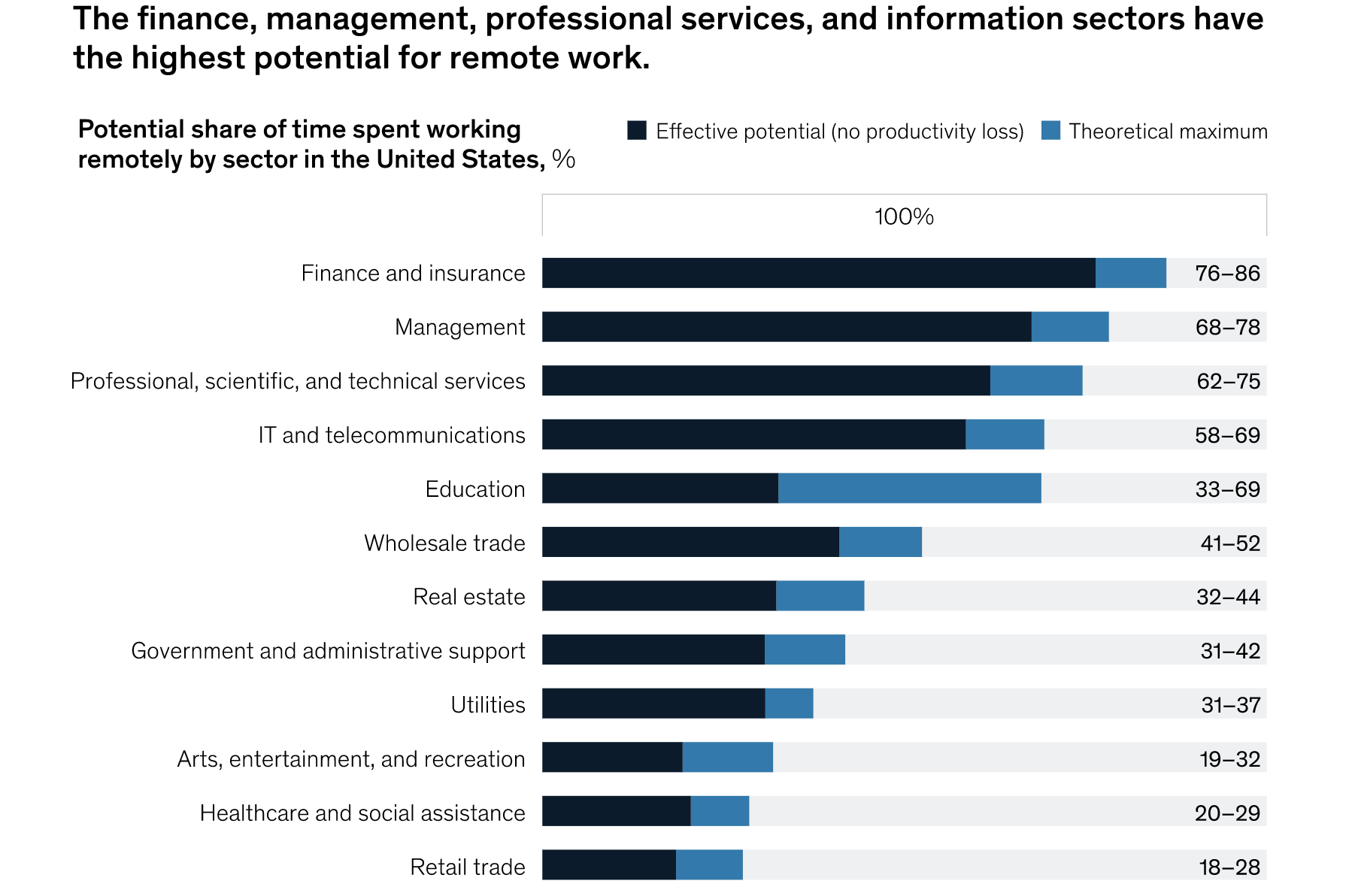 Check out the rest of the graph outlining the potential for remote work in different sectors.

Without the constraints of company headquarters to be based around, people can look at locations that fit their lifestyle and hobbies better. Family can come first as remote workers are now able to move closer to the ones they love or move out of the polluted cities and into a clean, vibrant part of the world. For the more adventurous types, cities located in areas with fantastic outdoor activities are no longer just available for a few vacations a year, instead, they could become a year-round habitat allowing workers to have the activities they love available every day. If these reasons aren’t enough to pique your interest, the financial incentives that cities are rolling out to encourage people to relocate are becoming increasingly noteworthy. As the tag line from one of these companies says: "Get paid to live closer to Mom... or the mountains."
There are a few companies that now support and offer incentives for remote workers to move to specific cities. A quick browse through the site gives a list of towns and cities throughout the USA offering from between $2,000 to $20,000 financial packages for people who wish to relocate. The incentives usually stipulate that you would need to settle there for a year or two and, in many cases if people end up working for a local business after moving there, this amount increases.

For people that would prefer to deal with incentivized states first-hand and bypass third-party websites, most states have set up slick websites showcasing what they have on offer. For example, there’s Alabama’s ‘Remote Shoals’ program that clearly advertises $10,000 incentives for ‘talented remote workers’ that:
It is worth noting that similar to some other schemes, the ‘Remote Shoals’  financial incentives are given out in increments, with 25% upfront, 25% after the first six months and the final 50% being given over after one year of living there. Tulsa’s initiative ‘Tulsa Remote’ has a similar structure to Remote Shoals, but also offers the extra option of putting the upfront money towards a down payment on a home. Tulsa Remote was actually the first major program in the US to incentivize remote workers to move into smaller cities. Their executive director consulted with some of these other programs later on, which is why you'll notice a similar structure in their offer and requirements. 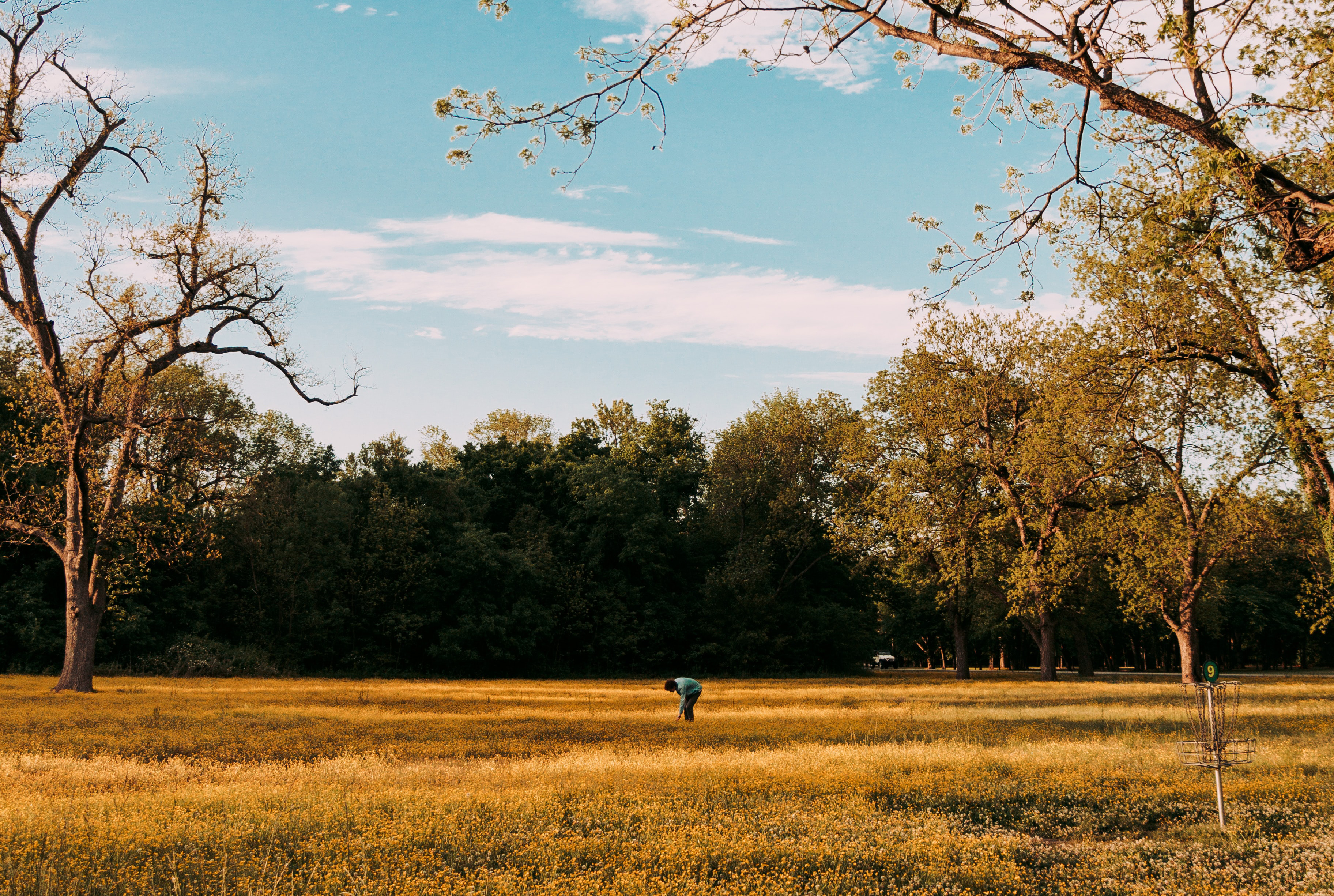 Jevon Williams is a data engineer and has been working remotely in Central and South America as an entrepreneur in both data management and hospitality, before deciding to take part in the program and relocate to Tulsa.

"I was living in San Miguel de Allende, Mexico before moving to Tulsa. Fortunately, the city is in a congruent time zone to most of my work, so there weren’t any challenges on that front. The biggest challenge was really settling from being a constant traveler to being in one place for a longer period of time. Most members don’t know much about the city and don’t have much exposure to the South, so it’s definitely a new adventure to move all of your belongings from a larger city or another part of the world to a mid-sized city without much pre-existing knowledge. However, Tulsa Remote also provides members with a plug-in-and-play community via Slack that allows you to meet other members before you move. This helped get some general exposure to the city, meet new people, ask questions that would traditionally be difficult when moving to a new city and make new professional connections. I'd say that it’s the money that brings you here, but it’s the people that make you stay. I think the initial challenge is simply opening yourself up to the idea of moving to a new place. Once people come here, especially from more expensive coastal cities, they realize that the quality of life is so much better along with the cost of living.  The big takeaways for me were the fact that the city is willing to cultivate a program like this and work with a private foundation to do so. I think that alone is interesting because it shows that the city is willing to form new programs that support community-building and business development. We are really starting to see the impact of the program, being that there is an extremely high retention rate and many of the members have bought properties here. I believe that we will continue to see this trend and that remote work will play a huge part."

Tulsa has growing opportunities for remote founders and entrepreneurs through Atento Capital, a VC fund dedicated to funding growth for new businesses, and InTulsa, which is a program that works with Atento Capital to incubate entrepreneurship.
When it comes to relocating to a more remote location, besides looking at the quality of life and financial prospects, there’s also a lot to be said in terms of professional growth. Metropolitan cities with large financial centers can be incredibly competitive environments for new businesses to start in, but many are coerced into launching in these areas by the ease of accessing the large talent pools that reside there. The emergence of incentivized smaller towns and cities could spread this talent out and provide the added bonus of giving small businesses and start-ups access to closer communities with untapped markets that have a lower level of the overall competition.
Pure cash incentives are a great pull for people working remotely who like to move to different locations from year to year, but what about those wanting to put down some roots? Besides Tulsa’s program with down payments, there are Minnesota, Nebraska and Maine offering free land, tax credits and cash rebates to people who plan on building a home. These methods were introduced due to a heavy increase in outmigration causing a steep drop in the population and a distinct lack of young professionals.
These communities are hoping to bring new remote talent into their towns by creating a mutually beneficial situation, by opening themselves up to the remote industry and young professionals to boost the population growth they need. This adds a nice bump to their economy whilst young professionals can capitalize on the low cost of living and the abundance of financial and land incentives on offer (Zillow knows what's up!)
The picturesque area of Niagra-Falls in New York state used to be a honeymooners haven but the location has witnessed a large decline in interest over the years as well as facing a rapidly decreasing youth population. The governor there came up with a unique idea to encourage young professionals to the area: debt payment. Young professionals who stay in the area for two years can get a rather substantial $7,000 erased from their student loan debt. Niagra Falls’ community development director came up with the plan all the way back in 2014 after reading multiple news stories about recent college graduates drowning in student-loan debt. At that time roughly 10% of Niagra Falls residents were moving out of town every decade. Not only that, but federal funding was at stake: Niagara Falls needs to maintain a population of 50,000 or above for federal funding to come through. Piccirillo explains, “Fewer people means less attention in the government’s eyes. You need people in your neighborhoods.” He encapsulates the problems these communities are facing and the reason behind these incentive schemes.

Remote work is now undoubtedly on the rise. Many of the incentive schemes available pre-date the COVID-19 pandemic and were a direct reaction to a declining economic and youth population issue. The pandemic has cemented the reality of a remote world, and these communities with schemes in place have seen an opportunity to refine their offers to attract those who now have the freedom to work remotely. These programs are rapidly changing the goalposts when it comes to criteria and fine print with updates on an almost monthly basis. Another notable aspect is the popularity of these schemes, the aforementioned ‘Remote Tulsa’ has received 20,000 applications since its inception in 2018.
Taking advantage of these schemes could lead to a drastic rise in the quality of life for many remote workers as they can move into smaller, interactive communities, gain insight into untapped markets and gain the freedom to pivot and explore new areas of creative opportunity. Bigger living spaces could become available as well as the ability to enjoy the great outdoors and escape from the city life. Some might find that, despite the incentives, many of these areas are just too far removed from the hustle and bustle of big city life.
But that is the biggest benefit of remote work: having the ability to choose what best fits the lifestyle you want.

Researcher & Writer
Luke has been traveling around the globe for the last decade and is currently based in Chiang Mai, Thailand. He's been working remotely on everything from directing music festivals, to online ESL coaching, to writing and contributing as a researcher for Borderless. He is a passionate advocate for the modern nomadic way of life and enjoys getting others started on their journey towards remote living.

Thank you for subscribing!

Building Remotely
AboutTerms & ConditionsSafetyWing.com
Made with ❤ by